Allan Karl, renowned motorcycle adventure traveler, photographer and bestselling author of “FORKS—A Quest for Culture, Cuisine, and Connection,” announced today that he has been tapped to host an original, and yet to be named, travel documentary series, and that he has finished primary filming in China for the pilot episode. A Vancouver production company led by producer/director Panayioti Yannitsos will produce the series destined for audiences in North America and around the world.

The travel series will include multiple one-hour episodes where Karl sets out to discover the world—one country at a time—alone on his motorcycle. Traveling from one border to another border, often spending 30 days in each country, Karl will explore roads less trodden and pursue chance connections, meals or drinks with locals: grandma in her kitchen, the fourth generation farmer, local celebrities and heads of state.

“We are excited to have Allan lead and host this new show,” said Yannitsos. “Allan has traveled through more than 60 countries, often for years at a time, and has the experience and personality necessary to connect with people and culture, which are all essential to realize our vision for this unique travel show.” 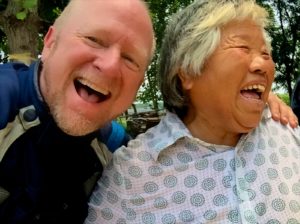 In each episode, Karl asks why, beyond the necessity of survival, do people everywhere and anywhere find purpose in life? How do the locals, from one country to the next, define “happiness” and where do they find it in their lives?

The pilot episode was filmed in June and July 2015 in the Republic of China where Karl traversed the country, from north to south, on his BMW dual-sport motorcycle. To keep the experience and connection with people as intimate and immersive as possible, the production employed a small crew and used the latest mobile video and audio equipment. “Because Allan travels by whim and circumstance, he will visit both rural villages and crowded cities, we don’t want to attract attention or interfere with the connections and conversations he has,” said Panayioti Yannitsos, producer and co-director of the series.

The new travel series is targeted at traditional and online networks focused on breaking new ground in nonfiction, unscripted television. This is not the first time Yannitsos filmed in China. His “Road to Ningbo,” short film was a selection for the 2015 Festival de Cannes Short Film Corner.

About Allan Karl
Allan Karl is a best-selling author, award-winning photographer, adventurer, and inspirational keynote speaker. With an insatiable passion for travel, culture, people, and food, he has explored more than 60 countries, photographing, writing, and blogging about them along the way.

In his bestselling book, “FORKS—A Quest for Culture, Cuisine, and Connection,” Allan brings to life his three-year motorcycle adventure—in stories, photos and food from each of 35 countries he traveled. Visit: website, Facebook and Twitter

The Most Precious Gift
TRY! 35 Ideas For Doing Something New & Different In Your Life

This site uses Akismet to reduce spam. Learn how your comment data is processed.

An inspirational speaker who understands what meeting and event planners are looking for in a professional keynote speaker for sales meetings, conferences, seminars and conventions.